So you’re now taking the Digital Logic class1. If you’re less familiar with computer science and engineering, you might think to yourself, “great, I’ll be doing some beep boop bop 🤖 binary things this term”. You’d be right. In class, you’ll learn boolean logic theory. In labs, you’ll see how that theory can be used to make something more concrete with VHDL. This primer assumes you’re familiar with boolean algebra using basic AND, OR, and NOT gates.

VHDL is a programming language to describe circuits. It literally stands for: VHSIC (yes another acronym–don’t sweat it) Hardware Description Language. VHDL targets digital circuits in contrast to analog circuits. Digital circuits consider discrete logical properties like 1’s and 0’s, Yes’s and No’s. Analog circuits consider continuous electrical properties like voltage, impedance, capacitance, et al. This is a generalization but will hold true as far as an introductory course is concerned.

Here’s a taste of VHDL:

Note: <= is an assignment operator in VHDL. It is not less than or equal to like in some other languages.

Although the syntax is a bit clunky, you can see how we’re just defining an inverter; a NOT gate. First, we declare the inputs and outputs of our circuit block. Then, we describe how the input is transformed into the output. We’re describing the following equation:

Amaaahzing right? Later on we’ll go into more details on the syntax.

Why would we want to model digital circuits? It’s easier to understand, modify, simulate, and test our designs by modeling our circuits in VHDL. VHDL (or any HDL) provides a common language that can be used at each of these stages, leading up to the final logic synthesis and layout steps, required to continue towards physical manufacture the design. During the digital logic design phase, VHDL allows us to treat circuit components as black boxes so we can build up more complex and powerful circuit designs.

Before we move on, let’s distinguish one more difference between VHDL and the imperative programming languages you’ve probably seen in the past. Imperative programming languages are based on the idea of sequential statements. In other words, steps are executed one after the other in the order they appear. For example, we can assign a value in one step and read it back in consecutive steps.

In VHDL, we model circuits, so data just propagates through signals (usually we can think of them as just wires).

If we read the above example like a sequential program, it looks like between is being assigned to b before between has any value! We don’t set between until the next line. However, when we go to run the circuit, we’ll see b and c will have the same value at the same time. This is because we’re just connecting signals together, and the value of a is just passing through our circuit to the other signals. In digital logic terms, this is called a fan-out. 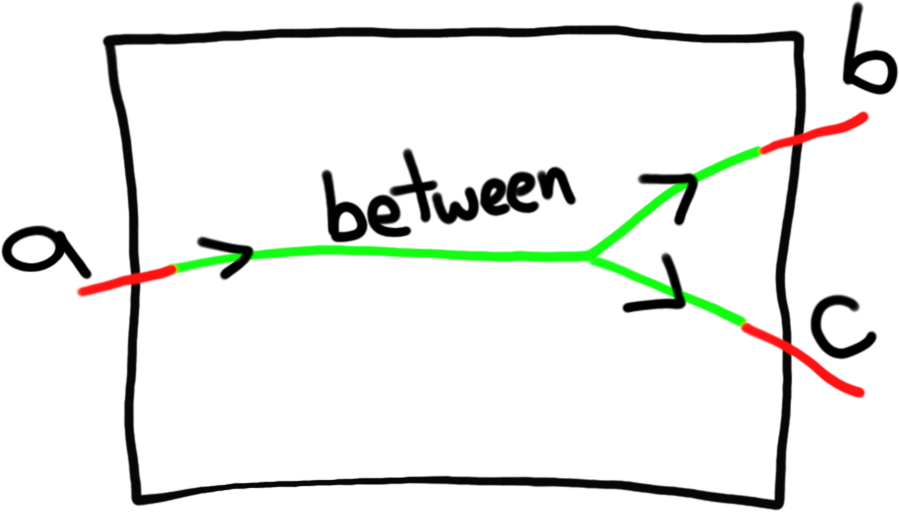 When we simulate this circuit all of our 1’s and 0’s flow through the circuit in a real-time(ish) way.

We’ll explain how to use VHDL with a short example.

We’ll make a basic selector circuit that selects between one of two signals. You may have learned about this circuit already, called a (2x1) mux.

Above, we’ve declaratively described a simple mux with text. It will be easier to implement the mux in VHDL from a formal equation, so that we can map the operations in the equation (AND, OR, NOT, et al) to basic gates in VHDL.

Eventually, you’ll be able to generate the equation directly from intuition. For now, let’s go through the process of making a truth table for all possible input combinations:

We’ll be verbose while simplifying our equation, for demonstrative purposes. If you’re able to jump right to the final equation, that’s great!

If we analyze the textual description, we can see how we’d intuitively generate our equation. When is 0 (off), our will be 0 if is 0, and 1 if is 1. The same can be said for when is 1 (on). If it’s not clear how that leads to equation \eqref{mux:final}, don’t sweat it.

Warning: Starting with zero instead of one is common in computer science and digital logic, mostly because it simplifies certain computations. It’s easy for this to get confusing or annoying when starting off, especially because the zeroth element (as written above) will sometimes be referred to as the first element 🤬. There’s no agreed upon way to refer to the…first? zeroth? index of a sequence, so both are acceptable terms.

In either case, make sure to check the actual indices (such as 0 or 1) and use common sense when implementing a circuit.

Step 3. Sketch out a Schematic

Sketching a schematic of our equation will help when translating our equation (read: circuit) into VHDL. It helps us identify all the pieces we’ll need to use in our VHDL code, e.g. inputs, outputs, intermediate signals, boolean gates, et al. A drawn schematic is not always required, but can help when we’re feeling lost and need to organize the problem. 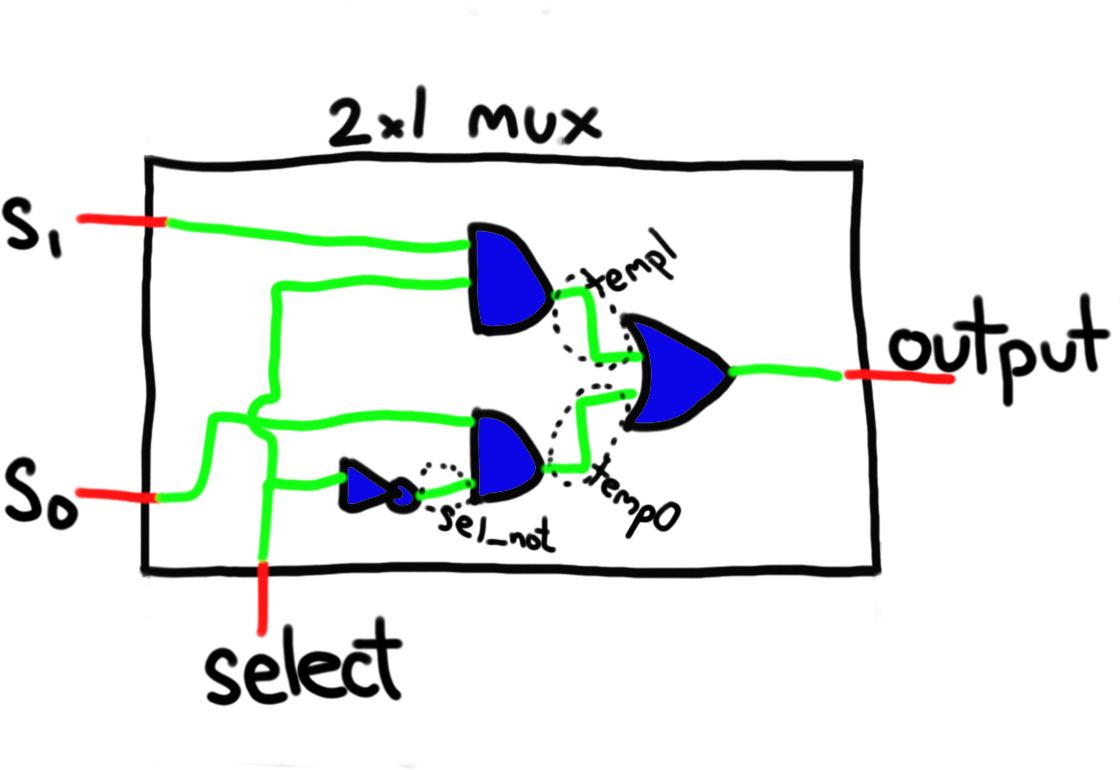 Great! Now we can code up our circuit!

Step 4. Implement it in VHDL

We just have to map our schematic to our code:

Let’s unpack this one piece at a time.

In the above example, the highlighted code differentiates between:

Note: VHDL is case-insensitive. That means it doesn’t matter if you capitalize letters or not: mux_2x1, MUX_2X1, mUX_2x1, etc all refer to the same identifier. In the examples shown, I made keywords ALL-CAPS and identifiers lower-case, to differentiate them. In your code, you can choose whichever you’re comfortable with. Just remember to stay consistent.

We’ve created a design entity (commonly referred to as a module).
3.1 in the IEEE Standard VHDL Language Reference Manual:

To reduce confusion with the ENTITY keyword, we’ll call this a module from now on. Basically, a module is a full description of a thing. It describes:

Note: A module is not just a VHDL file. A module (the ENTITY and ARCHITECTURE) could be spread across one or more files. Conversely, a single file might have multiple modules.

Signals are the basic data values in VHDL. We don’t use the term variable because it is reserved for sequential processes which won’t be covered in this guide.

Because we’re modeling digital circuits, signals can be thought of as the wires connecting components together. On line 12 of our mux, we declare the existence of our three extra signals. These are the “internal” wires in our schematic. We also have to give them a type, of BIT. This is important so that we know they’re compatible with our inputs and outputs, which are also type BIT.

We assign signals with the <= operator. This also informs us of the direction of our data. For example, s1 <= s2 means data is being read in from s2 and written out to s2.

The ENTITY describes the interface to our thing. The inputs and outputs, the wires we can set and read from, is described in the ENTITY.

You can see that each port is given 1) a name, 2) a direction, and 3) a type. For example: a : IN BIT; is named a, is an input from the outside world, and is a single bit. Ports need a direction because it makes it easier for someone to understand how the circuit is supposed to work and acts as a check that we aren’t connecting different circuits incorrectly. Because ports are technically signals, too, we can reuse their names in our ARCHITECTURE when reading their values in or writing their values out.

The name df is shorthand for dataflow. Dataflow is the name of the style used. In the coming weeks, we’ll also discuss behavioral (behav) and structural (struct) styles. We could have named our architecture GooGooGaGa if we wanted to, but it’s clearer to choose names based on the architecture style. There can be overlap between styles, and there’s not always a clean distinction, so use your best judgement when naming.

In dataflow styles, the architecture is just a set of signal assignments and equations. We are just describing how data flows. Once you see examples of behavioral and structural styles, the distinction will be more clear.

Any extra signal or component declarations will go between the ARCHITECTURE _ OF _ IS and BEGIN lines, which is line 12 in our example. We need to declare signals, so that we give them 1) a type, e.g. BIT, and 2) a name for us to use later. We need to declare components because…well you can check out the next section for that. After the BEGIN, we can put our statements. Statements are essentially lines which assign values to signals. They are how we make our circuit…well…work.

So to wrap up declarations go between ARCHITECTURE and BEGIN, and all the statements that do stuff go between BEGIN and END.

I alluded to extra components earlier, beyond simple NOT, AND, and OR gates. This is the cool part about VHDL! We can bit-by-bit (no pun intended 🤡) build up a bigger circuit from smaller component circuits.

Let’s look at another example where we use something we already made (the and4) and focus on the architecture body starting at line 14.

Note: “Heeey, the inputs are 1-based and before they were 0-based. AND you’re mixing 0-based and 1-based in the same code! Why would you do that?” Mostly just to get you used to seeing both, but also to see if you’re paying attention.

We can see that we declare the extra signals we plan on using. We mentioned earlier that we need to do this so we can use their names later on.
That’s simple enough. After that we have component declaration.

Okay, what’s that about?

Whew.
This is a long section, I know, I know, hush child! There’s another picture coming soon and we’re almost done.

So speaking of line 24, what the devil is going on there? Besides assigning signals with operations like output <= my_signal, or another_signal <= s0 nand s1, we can also assign signals by using other modules we’ve built! And like we went over earlier, between the BEGIN and END of the architecture body is where all these assignments happen.

We already know how to do basic assignment and use basic operators, so I’m gonna skip on ahead to…

Port mapping is, quite simply, mapping signals to ports of other instances. In line 24, I decided to use the and4 we made earlier to connect up some signals in my circuit.

We need to name them uniquely because we might have multiple and4’s, and then how do we refer to them? Here’s a pretty silly circuit: 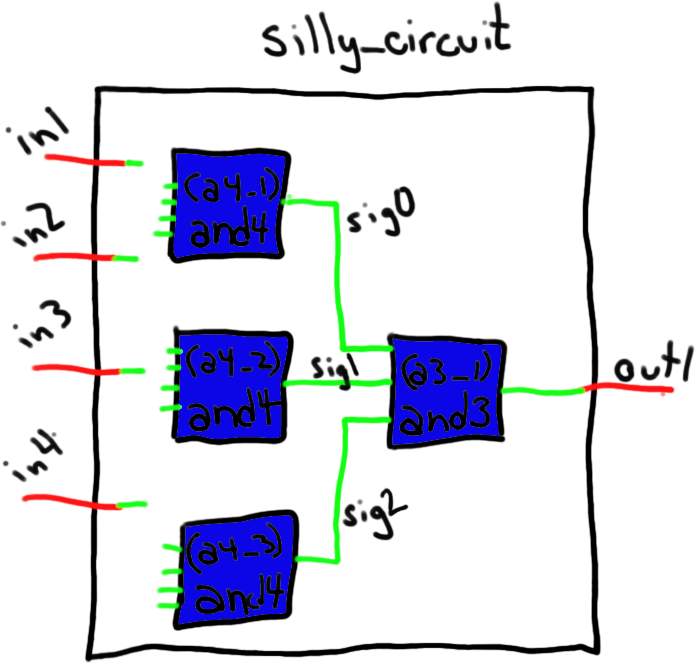 I spared you the horror of seeing all the wire criss-crossings. The inputs are all going to each of the and4 units. Here’s the module:

The last takeaways of this code is:

And that’s it! This isn’t an exhaustive explanation of building circuits in VHDL. In the coming weeks, we’ll learn how to compose simple circuits to build more complex circuits that can do math like or handle logic like checking if a thirsty soda-lover entered enough money into a soda machine.

VHDL is the language we use to describe the circuit. We need another piece of software to actually simulate that circuit and observe its functionality. In this class, we’ll use ModelSim both for coding and simulating. If you want to use ModelSim at home, you can download a version from the ModelSim website.